Welcome to part two of our Philip Webb chronicle! We’re concentrating on his early years in this blog, his friendship to Morris at this formative time was important and we look to explore this more as well as understand how both Webb and Morris rose to be such influential figures in their crafts- before they could do this, they had to learn their trade…

On the 16th May 1854, Webb began work at G.E. Street’s office- his salary? £1 a week- I bet we all wish such a an architect was a pound a week! It wasn’t until 1856 that Morris and Webb met, when Morris went to work for G.E.Street in Oxford, whilst Webb was the senior assistant. It has been recorded that Webb described Morris as, “a slim boy, like a wonderful bird just out of his shell.” It was these two who were to become the Art and Crafts movements most influential pioneers. It was around this time that Webb and Morris took up the crafts that would make them famous over a hundred  years after their deaths for the talents they possessed- the crafts included carving, wood-engraving, embroidery and clay-modelling. Morris was inspired by John Ruskin who designed many beautiful Gothic buildings, and upon finishing his degree he devoted his life to architecture.

Morris didn’t enjoy the work in Street’s office, he found the measured drawings tedious and difficult. Webb and Morris continued their friendship as Webb showed him his favourite haunts in Oxford, taking him to old churches and showing him the architecture around them. They formed a close friendship which would last until Morris’ death, and have important affects on English architecture, interior design and the preservation of historical buildings. The book Philip Webb, ‘Pioneer of Arts & Crafts Architecture’ by Sheila Kirk summarises their friendship wonderfully, “Their personalities were complementary. Morris, usually somewhat unkempt, was mercurial, rebellious, vehement, and prone to sudden enthusiasms which he pursued with an egotism Webb described as ‘amusing and childlike’, and to sudden violent rages in which he sometimes damaged himself and the furniture. Webb, a tall, slim man with a serious, intelligent and kindly expression, was extremely reticent, of equable temper, self-controlled, slow to form or change his beliefs, and careful of his appearance. Both men were steadfast on matters of principle, loyal, sincere, lacking in pettiness, and wholly without pretence, with a strong aversion to the artificiality of formal social occasions.” (Kirk, 2005, P.15)

When Burne-Jones first met Webb, he apparently was suprised he was of the same age as him as when Morris described his friend from work he spoke of him as a, “very fine old fellow in the office.” (Kirk, 2005, p 15) Morris left Street’s office in 1856, he was tired of architecture full time, and though it remained a passion, he preferred to create things with his own two hands- though an architect designs the property, they don’t create it, and so he left to pursue painting.

The Pre-Raphaelite Brotherhood, begun in 1848 had been disbanded by 1856, but, “a wider circle of painters, centred round Rosetti, had espoused its ideal of portraying people and events in the colours and attitudes of real life instead of the formal conventionalised postures and arrangements, with colour subordinated to drawing, demanded by the royal academy.” (Kirk, 2005, p15)

Webb was, by all accounts, a lovely man. He was immensely kind, honest, and was hugely supportive of his friends successes. When someone was worse off than him, he made a point to help them out even if he didn’t have it himself, he was known for giving money as ‘gifts’ not loans, so only if someone came into good fortune were they to repay him. When Morris set up the Kelmscott Press in 1891, Morris insisted on giving Webb a copy of every book he published, so Webb bought a copy of every book published to lend to friends so Morris wouldn’t financially suffer from his generosity. Sydney Carlyle Cockerell, the secretary of Morris’ Kelmscott Press from 1891-1896 recalled Morris referred to Webb as, “the best man that he had ever known.” (Kirk, 2005, p16.)

After Morris met and married Jane Burden, Burne-Jones engaged to Georgiana Macdonald and Rossetti to Elizabeth Siddall, Morris decided to build a house in the country to realise his and Burne-Jones’ dream of a monastic establishment, calling themselves the brotherhood. This had to be revised once the men married, and the dream would be realised on a part time basis. This house remains today as Red House, which we will focus on in our next blog, and is now a beautiful National Trust property which we would highly recommend visiting. Webb met Faulkner when they were both painting the Debating Hall, and in 1858 Faulkner, Webb and Morris took a trip to Paris, which has become a famous holiday as the three were heavily inspired whilst in France, Webb returned to England with not only an intensive knowledge of British buildings, but now also an awareness of French churches, castles and townhouses. Taking a month to complete, the three rowed from Paris to Caudebec, the boat arrived with a hole in it from Oxford, to Morris’ fury. “They hoisted sail in favourable winds, slept at inns, and stopped to explore towns and make short excursions. It was an unusual and adventurous holiday, involving not only he studying of medieval architecture but also hilarious battles with soda-water syphons, a leaking boat, being stranded in a lock because Morris had angered the lock-keeper, and a narrow escape from being shipwrecked by the tidal bore.” (Kirk, 2005, p.19)

Our next blog picks up the story after the friends return from their trip! 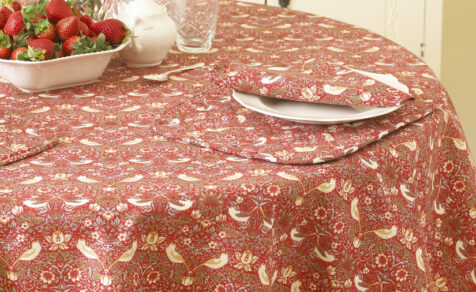 It was when Morris attended Oxford University that he met his close friend Edward Burne-Jones, who then helped introduced him to artists in the pre-Raphaelite... John Rylands University Library, Manchester, is holding an exhibition about the designs and prints of William Blake etchings and engravings until Sunday 23 June... Working on and launching a new design is always an exciting time- getting the colouring and detailing just right is something we here at Laura's Beau...